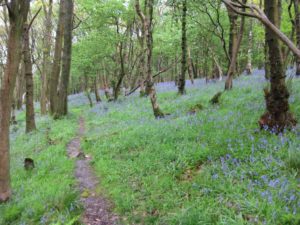 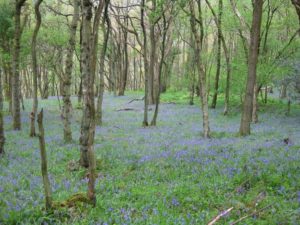 This amazing walk at just under 4 miles feels longer, and passes through a delightful old wood, really temperate rain forest. In mid May the bluebells are spectacular in Outhwaite Wood. The northward part is all on concessionary paths, the return on Public footpaths and road.  Park just off the road north of Barkin Bridge, 3 miles south of Hornby. A stile/gate lead into a field on the opposite side. Go up the bank to a further stile and follow the fence on the R till a signed gate on the R. This leads on above the bank and trees to a further gate, where a track leads down into a marshy field. At the far end look out for a bridge to cross the Roeburn, and follow the path in the wood till a sign leads up a steep bank into the open again. Follow signs and markers basically along the top of the woods, up and down, in and out, but watch for an unsigned way across a stream in a gully on the L just after a stile, as the entry into the woods again is just after this gully, via a stile. The path is now delightful through the ancient woods. Through a dense band of hollies take the left path at a sign, which descends around a recent landslip down to the river plain. Keep R at a junction, which stays in the woods to emerge in a sparse orchard, at the far end of which another bridge crosses the burn again. you are now on a public path. It is now 50 years since this river, swelled by 2.5 inches of rain in less than an hour, hurtled down the valley and destroyed  a farmhouse then several houses in Wray. The track leads up, you go L at a signpost through the tiny Community of Middlewood, where we have never seen anyone in 20 years, and keep R to a stile into the woods shortly after. This path needs repair, so be careful as you ascend. The signed path then leads up to the L of farm buildings not on some maps, then L across a deep gully by a bridge. Marker posts show the way. At Back farm join the track to the road and head back to your transport with a good view of the lonely Bowland Fells ahead.

If you are enjoying my content please consider supporting my passion by purchasing one of my books. Many thanks, Hugh.

24 walks into the hills surrounding the historic and iconic Settle to Carlisle railway, based on the stations between Settle and Appleby. The area has some of the finest walking of the north Pennines: the Craven district around Settle; the Three Peaks area; Dentdale, and Mallerstang and the upper Eden valley.

Over the last two decades, mountain biking has developed enormously as a “sport”. We greatly admire the technical and athletic capabilities of modern day mountain bikers and recognise that many excellent guides have been written and custom-built trails set up. In this guide we try to reopen a sense of adventure and wilderness to mountain biking, providing multi-day routes with a remoteness, continuity and “arc” missing from many modern guides with their focus on day and half day outings.

With over 22,000 ft of ascent in 105 miles set out over 8 days, this walk sets out from Settle, taking in the classic summits of the North Yorkshire Dales, Howgills, Eastern and Northern Lakeland Fells, to arrive at Carlisle. The return journey to Settle by one of the classic train journeys. Illustrated with photographs and route maps.

Why should you walk these Cheviot hills? Because they're Nuttalls, they're deserted, and the Breamish valley is worth a visit. I reckoned the shortest walk was from Ewartley Shank farm, or more accurately, as there is no parking there, from the cattle grid 1km before it. Take the grassy track near

This pleasant circuit of just short of seven miles was shown to us by Tim and Christine Shaw, and would be as good in a northerly winter gale as the summer. From Conistone head east up the track from the Maypole on the green, and keep going up the defile, the Dib, which is similar to many in

Strange to have taken so long after the 2014 reprint, you may think, to correct an error, and a further change to the route should help. So, walk 11 in the Hillwalks from the Settle to Carlisle railway stations, page 102,second para, it should read ".... a further 250 yards watch for an oblique